Four. That is the number of centre-backs Premier League newcomers Aston Villa have signed already this summer. You’d think they’d be done after all that.

Apparently not, though. Turkish publication Spornow posted on their official Twitter account on Monday that the Villans have made a £10.7million offer to Super Lig giants Galatasaray for, yes, you guessed it, a central defender. This time, one named Christian Luyindama.

Obviously, it’s more difficult to keep out Premier League attackers than Championship ones, but do you really need five new centre backs to help you do it?

Either way, Luyindama is seemingly a transfer target for the Midlands giants. The Turkish media are notoriously unreliable, but the link has been made, so let’s investigate it.

TiF Tactics – Is there any point in this potential signing?

Aston Villa, as mentioned, seem to quite like centre-halves at the moment. Yes, they lost Axel Tuanzebe, who has returned to parent club Manchester United, but with captain James Chester still in place, this all seems a little excessive.

But, let’s give Luyindama his dues. He’s playing for a big European team in an ever-improving league; so the question is, is there any point bringing him to the club?

When you look at the statistics and consider the context of Villa’s summer recruitment to date, the answer to that query would appear to be a resounding no. 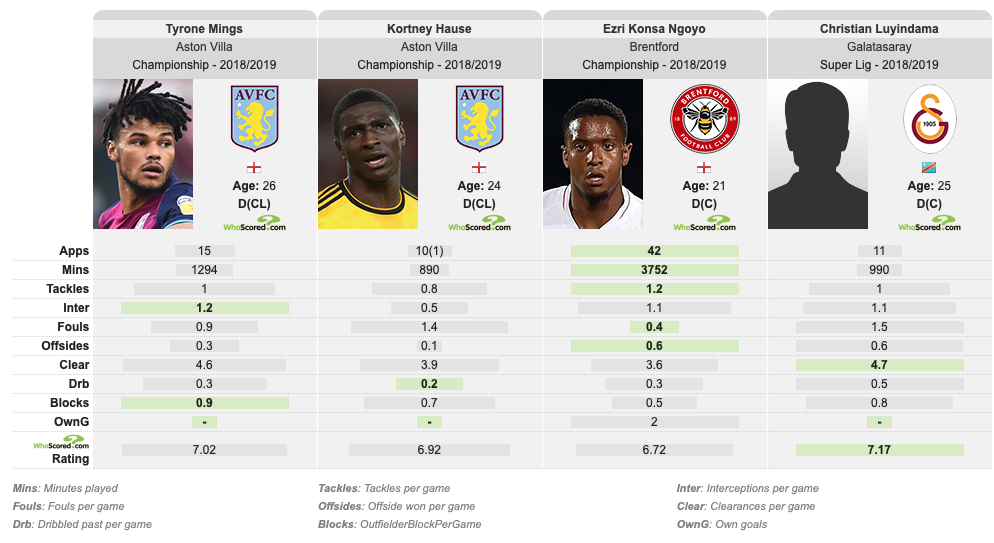 Perhaps surprisingly, it’s summer signing Ezri Konsa who leads the way in the majority of the major defensive statical categories last season, as per WhoScored.com.

The 21-year-old played the most by some distance, to be fair, but he averaged the most tackles and offsides won per game, while giving away the fewest fouls.

Lundiyama, on the other hand, was penalised the most by referees. He was also the player dribbled past most frequently, which is seriously concerning. Other than that, though, he was in and around second-best in most categories.

The fact that he only played 11 league games is another concern, however. Should Villa really be splashing out on someone who wasn’t a first-choice player, especially in such a loaded positional group?

So it would appear that there is little to no point in this potential move. Luyindama is a decent enough player, but he’s not someone who blows your socks off, which is what he’d need to be to justify being the Villans’ fifth centre back signing of the summer.

You wouldn’t have thought so, would you, given what Villa have done in the transfer market thus far? Luyindama, as mentioned, is a decent player, but it would just be silly to sign yet another centre half when there are still other areas of the team that need improving.

Clearly, Dean Smith’s men are ready and willing to splash the cash in their bid to make a successful return to the top flight, but there are much better uses of £10.7million than another central defender, that’s for sure.