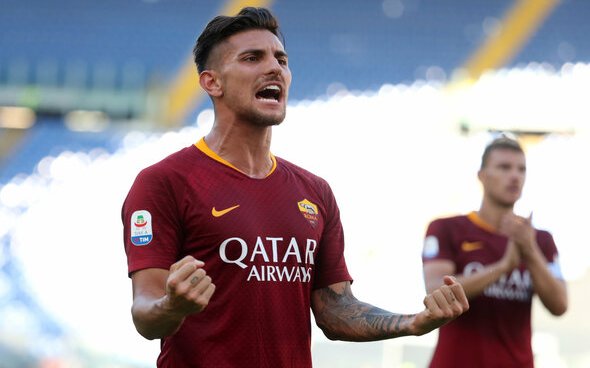 Tottenham have made an approach to sign Roma midfielder Lorenzo Pellegrini, according to La Gazzetta dello Sport journalist Nicolo Schira.

He claims that while Roma are trying to tie him down to a new contact which will remove the release clause of €30million (£26.7million – payable in two instalments), clubs are trying to snatch him away.

He says Pellegrini’s agents have had calls from the two Milan sides but have also received proposals from Tottenham and Arsenal.

Schira made the claim on his personal Twitter account on Tuesday. A previous report from Calciomercato said that Pellegrini wanted Champions League football and that he would be interested in signing for Tottenham.

Tottenham have had problems in midfield since Mousa Dembele left least January but Pellegrini – as good as he is – probably isn’t the answer here. He’s more a playmaker and scored four goals, adding seven assists, for Roma last season. However, he is a very good player, a current Italy international, and the terms of his release clause would really appeal to Daniel Levy. The £26.7million release clause is a bargain and the fact that any suitor can pay in two instalments makes a deal even more attractive. He’s only 22-years-old, so fits the brief of Tottenham who are actively targeting players 23 or under. We think he would make a very good signing for Spurs, although they would still need to sign a more physical centre-midfielder.

Roma want to sign him up to a new contract and get rid of the release clause, but Pellegrini is said to want Champions League football, something that Tottenham can do. This could come down to how serious Pochettino and Levy are about a move, and whether they can seal a deal quickly before Roma make him an offer he thinks he can’t refuse. With big teams on the horizon though, and his agent said to be in London, we think this one has legs.