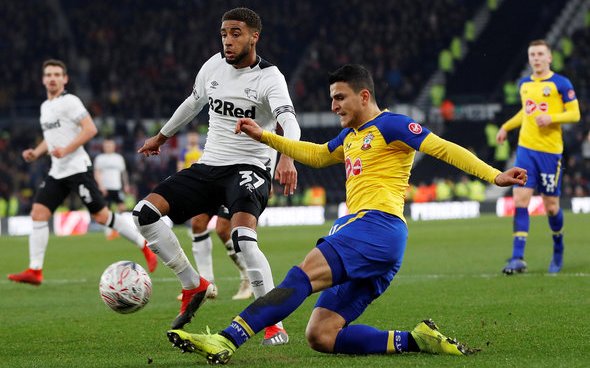 Aston Villa are not interested in signing Derby County full-back Jayden Bogle, according to The Sun journalist Alan Nixon.

The Villans overcame the Rams in the Championship play-off finalist month, a match that the 18-year-old featured in.

It capped off a stellar breakout year for the teenager, who played 50 times in all competitions this season.

But Nixon is adamant that Villa will not be making a move on him.

Writing on his personal Twitter account, when asked about the possibility of an approach, he simply wrote: “No”.

This probably isn’t the worst thing in the world. First and foremost, not many Aston Villa fans will have been expecting above for Bogle at all, so being told it isn’t going to happen won’t exactly break many hearts. Secondly, and more importantly, Bogle is being heavily linked with a move to Brighton, as reported by the Daily Mail, and the fee is being touted close to the £10 million mark. That’s an awful lot for a teenager with just one year of second tier football under his belt, and while there is nothing to suggest that he won’t go on to be a great success, it would still represent something of a gamble. Villa need to be wise and prudent with how they spend their cash this summer, and frittering away that kind of money on a player like Bogle would not be the most sensible thing to do. Perhaps a year or two down the line, maybe, but right now, best to steer clear of this one.