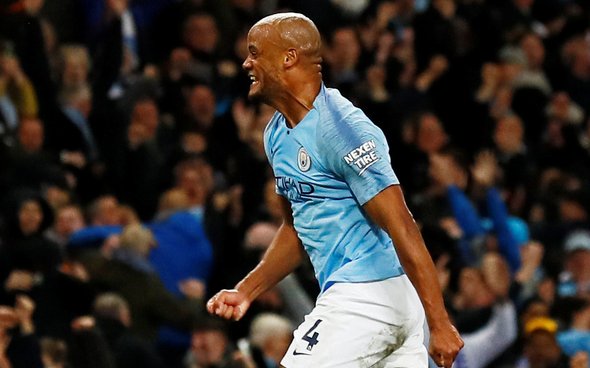 Manchester City captain, Vincent Kompany, is out of contract in the summer and manager Pep Guardiola is to hold talks with the veteran at the end of the season.

Kompany scored a memorable winner in City’s 1-0 win over Leicester last Monday, which was good news for punters using their bethard sign up offer to back the Citizens, and Guardiola is keen to sit down with the 33-year-old once the FA Cup final is played.

“We spoke with him and his agent. At the end of the season we are going to talk to him clearly,” Said Guardiola, as quoted by the Manchester Evening News.

“He is an incredible human being and he has helped me a lot. Always I was sad I could not use him too much but we have always known we could count on him for his personality. This club is what it is because of people like Vincent. At the end of the season, after the FA Cup we will decide the best for both parties.”

Vincent Kompany will go down as a City great. He captained the club to their first ever Premier League title and may well have scored the goal that decides this season’s title race. Despite him being a club legend, Kompany is now 33 and has only featured 16 times in the league this season. Competition for places in the Manchester City side is stiff and with the likes of Laporte only getting better, Kompany may find it very difficult to get any sort of regular game-time. City could hold on to the Belgian for sentimental reasons, however, if the defender is not getting much game-time, he will be better utilised elsewhere. Kompany could end his City career as a Premier League and FA Cup winner, it is the perfect time to bow out of the club. He will forever be remembered and whichever agreement that is made between the player and Guardiola, he will remain a true favourite.