Marco Silva must axe Dominic Calvert-Lewin from his starting line-up if he wants to name Everton’s best possible team for the clash against Burnley at Goodison Park on Friday night.

Calvert-Lewin, 22, has been a mainstay in the side lately, starting all but one of the Toffees’ last 11 Premier League fixtures. However even the most hardened of Blues fan will admit that last week, the 6ft 2 (transfermarkt) forward was poor against Crystal Palace and should be dropped from the side that starts against Burnley.

Richarlison might not have been much better than Calvert-Lewis in the 0-0 draw against Palace, but the 21-year-old Brazilian has 14 goals in all competitions this season and should start up front instead.

Ademola Lookman should then come into the side to start on the right-wing in a bid to add some more pace and flair out in the wide areas.

The England Under-21 international has found game-time hard to come by this season with just three starts in the Premier League in 2018/19. However he is someone who can add a bit of an X-factor to the Everton attack after their limp display against Crystal Palace and Burnley are going to be just as hard to break down on Friday. 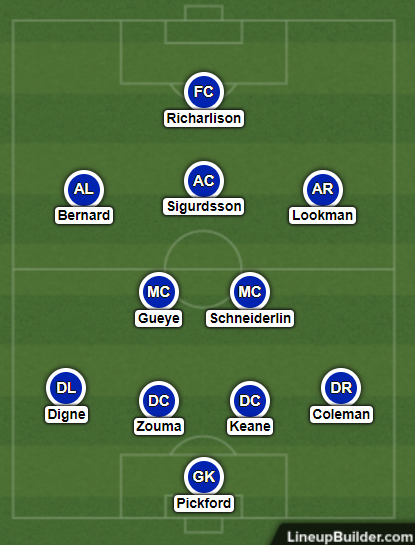 Silva should not make any changes to his defence after not conceding any goals in their last two matches. Jordan Pickford must start in goals behind a back-four of Seamus Coleman, Michael Keane, Kurt Zouma and Lucas Digne.

Idrissa Gueye and Morgan Schneiderlin have played well alongside each other in the midfield lately so they should both start there with Gylfi Sigurdsson ahead of them in the No 10 role.

Bernard should start on the left wing with fringe player Lookman on the right and Richarlison up front as the centre-forward.

Burnley are a team that love to sit back and defend but if Silva names this starting line-up on Friday then Everton are bound to crush the Clarets and keep alive their bid to finish seventh in the Premier League standings.