How do Rangers expected to improve if they are targetting players like Greg Stewart? According to the Evening Times newspaper, the Light Blues are on the verge of signing the Aberdeen loanee, whose deal with Birmingham expires in the summer. Understandably, many Rangers fans have gone berserk over this transfer update, and they are not at all impressed by the interest shown in Hearts’ John Souttar and Motherwell’s Jake Hastie either. It is no shock to see fans seething about signing Stewart and Souttar as they are well short of the quality that is required at Ibrox to mount a serious title bid. Hastie on the other hand could be a shrewd signing because he is young, has great potential, is in good form and his Motherwell deal expires soon. As for Stewart and Souttar, Gerrard will hopefully miss out on both of them because as these Rangers fans have said, they are not at all good enough.

All 3 of them are not good enough.

Not Rangers standard, nowhere near good enough for us!!! Aberdeen is his absolute limit at a push!!!

If this is to replace morelos am chuckin it

Hope this isn’t true. Hastie maybe has potential but Greg Stewart adds nothing to our squad and along with a few midfielders we already have, just isn’t up to it

Why we signing this pish!! Need better quality than that https://t.co/IAABfvwtPN 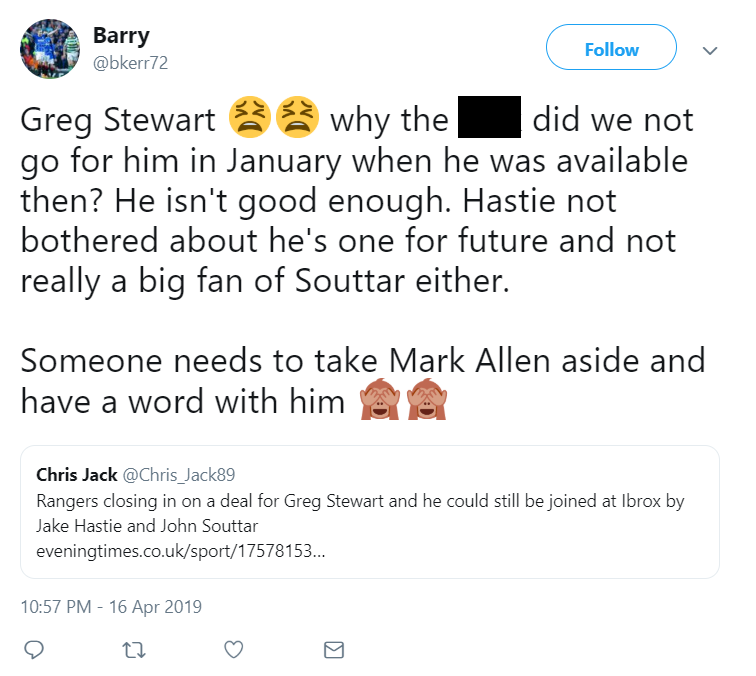