Hazard confident he will be playing with Chelsea next season 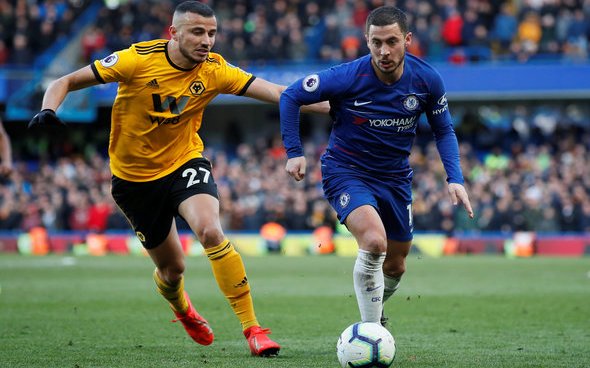 Eden Hazard stated his and Chelsea’s desire to be playing Champions League football next season, after the Blues secured a 1-1 against Manchester United at Old Trafford.

The result ensured Chelsea remain in the top four of the Premier League table, and ensured the gap between themselves and Manchester remains at three points with just two matches remaining. The Blues now hold a two point lead over Arsenal in 5th, after Arsenal were thumped 3-0 at Leicester earlier on Sunday.

In his post match interview following the match at Old Trafford Hazard told Sky Sports: “Chelsea has to play in the Champions League every year it’s one of the biggest clubs in the world.

“For myself I want to play in the Champions League, but we will.”

Hazard then winked to the camera in a cryptic fashion.

Hazard has been linked with a potential departure from Stamford Bridge this summer, but if Chelsea can finish in the top four they maybe able to hold onto to their star man.

This interview will give Chelsea fans some confidence that the club will be able to convince Eden Hazard to remain at Stamford Bridge beyond this season. The Belgian playmaker has had another excellent season this year, scoring 16 goals and providing 13 assists in the Premier League this season, and being named in the PFA Team of the Year. However, there have been rumours circulating that Hazard might be looking to move away from the club in the summer, these comments though suggest that he is willing to commit his future to the club. If Chelsea are to keep hold of Hazard it is vital that they secure qualification for the Champions League, which since the turn of the year has been far from certain. Despite some problems in his first year in charge Maurizio Sarri now has his side in pole position to finish in the top four, with Chelsea two and three points clear of Arsenal and Manchester United respectively with two games remaining. Chelsea can also qualify to the Champions League by winning the Europa League, where they are in the semi-finals, if they can secure qualification Hazard could well remain a Chelsea player next season.