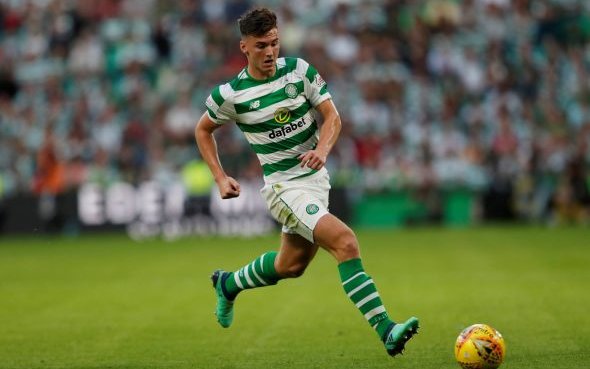 Celtic manager Brendan Rodgers will give left back Kieran Tierney up until Wednesday to prove his fitness for Thursday’s Europa League clash with Valencia, according to The Scottish Sun.

The newspaper claims that the Scotland international, who has been sidelined for two months with a hip injury, is desperate to face the Spanish giants at Parkhead.

Tierney is understood to have pleaded with Rodgers to be allowed to play on Thursday, having returned to light training last week.

The Hoops chief is facing a selection dilemma at left back, with Tierney’s back up Emilio Izaguirre also crocked, leaving winger Jonny Hayes as a likely starter as a makeshift full back.

Well, everyone associated with Celtic will be hoping that Tierney shows enough to Rodgers to earn a starting spot on Thursday. The 21-year-old is vitally important to this Bhoys team and has been for some time now. There’s no doubt that Rodgers’s team are weaker without Tierney, but is it worth the risk in rushing him back on Thursday? There’s no chance that he can quite be back to full fitness just yet, so it’s all about Rodgers managing risk vs reward. The fact that Izaguirre is also out compounds the Northern Irishman’s selection dilemma. Hayes is a decent player but he is by no means a full back. To ask him to defend against the quality of attackers that Valencia possess is a big ask. However, it’s also tough to give Tierney the task of coming in cold and coping with a team like Valencia. Either way it’s going to be difficult for Celtic so we’ll have to see what happens.