Pochettino will be elated that Llorente/Son combo paid off 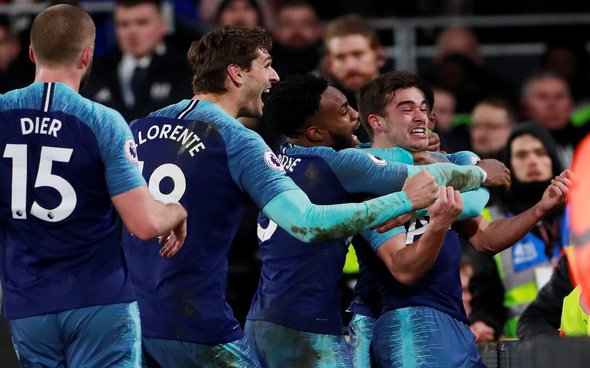 Few would have predicted that Tottenham striker Fernando Llorente would have filled the void up front admirably in Harry Kane’s absence.

In fact, you would not blame the fans in the slightest for fearing the worst when their star forward was sidelined with an injury and Llorente had to come in to take his place.

However, many of those supporters are no doubt mincing their words, as the Spaniard has coped rather well after being thrown into the deep end in recent times.

He has been played on his own up front for the majority of the time he has filled in, but boss Maurcio Pochettino opted to see him lead the line alongside Heung-min Son in the 3-1 win over Leicester on Sunday.

Spurs do not usually deploy two leading the line, so some supporters were no doubt fearing the worst when the team was announced at the weekend.

Nevertheless, it looked like Pochettino’s risk paid off, as both players worked together in attack excellently – their link-up play was decent and they always looked a threat for the Foxes.

Pochettino will surely be jumping for joy after seeing the two players work so well together, and it may lead him to deploying two up front more often, whatever combination it may be.

Nobody would have thought that Llorente would thrive having someone else in attack with him as he is no doubt used to playing as the isolated striker, but him and Son worked together beautifully, bar the South Korean being booked for diving.

The fact that the combination paid off will also be music to the manager’s ears, as it is another option that could ease the burden off Kane when he returns from injury – the England captain will certainly make the starting XI when he recovers, but having this option will allow Pochettino to rotate his squad that little bit more.

Either way, Pochettino will surely be elated that his risk paid off on Sunday.