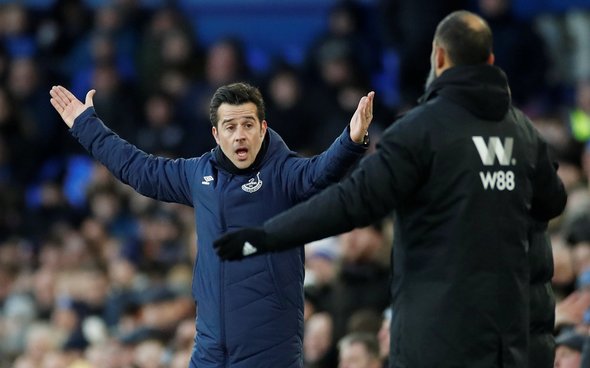 Jim White revealed that Everton owner Farhad Moshiri told him that Marco Silva was a talented coach who was planning for the long-term future of the club.

The talkSPORT host shared that he spent 30 minutes with the Toffees chief in London and that Moshiri had informed him that you have to hold your nerve in regards to the club’s current form.

White added that Moshiri made it clear that he was aware that Everton fans demanded good football and stated that the club wanted to give it to them and develop young players at the same time.

“So last night Bob (Mills) and Micky (Gray) I was in the company of majority share owner Farhad Moshiri for about half an hour, who had flown in from the United States and he is here set to take in the Manchester City game at Goodison on Wednesday night,” said White on talkSPORT (Tuesday February 5th, 10:07am).

“And of course Everton have won nine in twenty five in the Premier League and they sit ninth at the moment, it has been a bit indifferent it’s fair to say and out of the FA Cup and all Evertonians wanted Everton to go all the way and win the FA Cup, they want a trophy, desperate for them to win something and it hasn’t been going all that well under Marco Silva.

“But Farhad Moshiri told me last night and he told me you can say this tomorrow morning on your show on talkSPORT, ‘it’s a project, the Everton fans quite rightly demand good football, we want young players to develop and they need to play’, Farhad told me in his office in central London last night.

“Then on Marco Silva, ‘Marco Silva is a talented coach but he is planning long-term, he will coach and develop those young players and every year those same young players will become stronger.”

“And in regards to Everton’s inconsistent form Micky, Farhad Moshiri told me this, ‘in this business you have to hold your nerve’ and that was that.”

It looks like Silva is set to stay in the Goodison Park hotseat by all accounts based on what Moshiri told White on Monday evening. The Toffees manager has come under intense scrutiny for the Toffees’ recent run of bad form and many were probably thinking that the Portuguese boss was heading for the exit door. Yet based on what Moshiri has told White, the Toffees manager’s job is safe as the owner is aware that the club is a long-term project and the younger players at Goodison need time to improve. This news will probably be greeted with a mixed reaction by Toffees fans as while some will be glad that their side isn’t changing manager once again, others clearly aren’t happy with life under Silva. There have been noticeable boos around Goodison Park  as of late over recent results, and you feel some fans would have been eagerly anticipating the manager getting the sack. However it seems those supporters are set for disappointment.