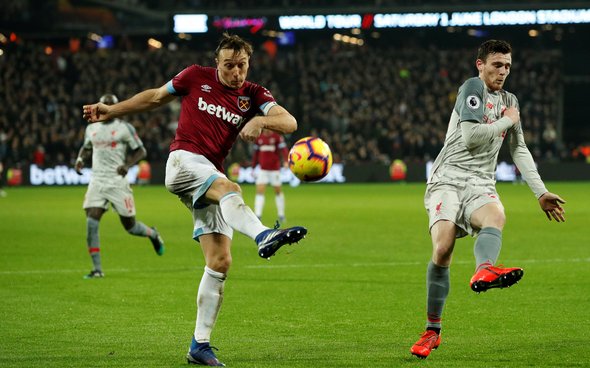 Sam Allardyce hit the nail on the head by claiming that Declan Rice is the reason why West Ham midfielder Mark Noble is flourishing again for the club.

The former Hammers boss claimed that the 20-year-old being in midfield was keeping his experienced teammate going as the veteran could rest assured that Rice was behind him to cover any mistakes or errors.

“Keeps old Mark Noble going as well don’t it as he is experienced in that side now and he is flourishing again even at his age due to his technique and quality because he knows that he has a Declan Rice covering up behind him a little bit,” said Allardyce on talkSPORT (Tuesday February 5th, 6:46am).

It’s fair to say that in his 2017/18 campaign the majority of Noble’s 33 appearances were disappointing and you started to question how much longer he could continue to be a mainstay in the Hammers’ side.

The 31-year-old’s lack of pace was often exposed by his opponents and it left you concerned that Mr.West Ham was becoming a liability in the team.

However while Noble’s form has been a rollercoaster ride in the current campaign as well, it’s clear there have been more highs than lows.

At times the veteran has stolen the stole, and even the Man of the Match award, in some of the 21 outings he has made across all competitions.

It’s fair to say Rice, who Manuel Pellegrini has moved into midfield this season, has shone and has complimented Noble in the heart of the Hammers’ team.

If Noble is unable to reach a loose ball quick enough or get back in time after surging forward, Rice is there to cover him and it’s clearly enabling the Hammers captain to put his abilities to their best use.

While Noble does deserve credit himself for some of his amazing performances this season, it’s fair to say that having Rice in midfield with him has allowed him to flourish just as Allardyce claimed.