Newcastle must not leave out Barreca and Dummett 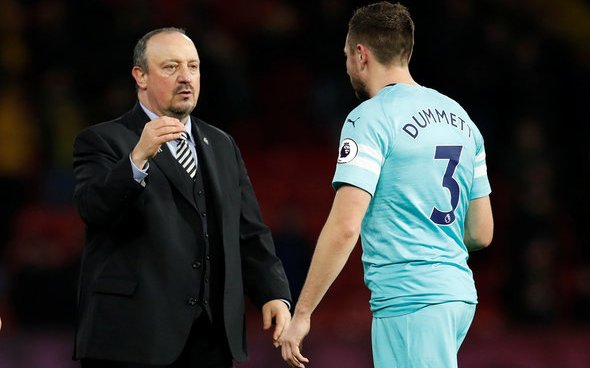 Rafa Benitez made no secret of how desperately he wanted to sign a left-back during the January transfer window, and he got his wish when Newcastle United secured a loan move for Antonio Barreca.

Now, with both the Italian and first choice left-back Paul Dummett featuring in Saturday’s 1-1 friendly draw with CSKA Moscow, Benitez is spoiled for choice on the left side of defence, but he must resist the urge to play either when the Magpies face Huddersfield Town on Saturday.

The Toon Army could, and should, have picked up all three points in their last Premier League match, only falling foul of a last minute Willy Boly equaliser for Wolves.

They played a three at the back in that match, and it would be wise to do the same for the foreseeable future.

A three at the back plays to the Magpies’ natural strengths as a squad, allowing Jamaal Lascelles, Fabien Schar, and Florian Lejeune all to feature, while also getting the best out of Matt Ritchie and the attacking minded Deandre Yedlin.

Both wide men have pace to burn and allow for a much more fluid attacking lineup that could be really beneficial as the Toon look to pull away from the drop zone.

It is not that Barreca is a bad signing, or that Dummett doesn’t deserve a start, but the Terriers are there for the taking and Benitez should utilise a rare opportunity to win a game by a commanding margin by giving his side width and pace.