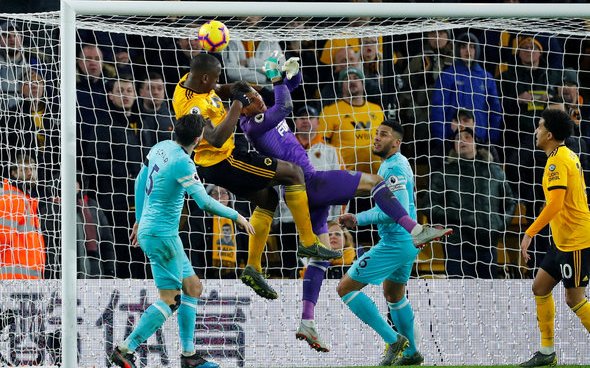 The big centre half climbed highest to power a header past Magpies goalkeeper Martin Dubravka in stoppage time, but there were some suggestions that Dubravka was fouled as manager Rafael Benitez fumed at full time.

Halsey has given his point of view: “I felt Graham Scott made the correct decision by awarding Willy Boly’s injury-time goal,” he wrote for The Sun. “Newcastle goalkeeper Martin Dubravka never had the ball under his control and Wolves centre-back Boly had every right to go for it. It wasn’t a foul for me.

“The time added on was also questioned but I felt it was fair. Referee Scott asked for a minimum of an additional four minutes and Boly scored after 94 minutes and 34 seconds. But Newcastle made a substitution at the start of added time when Ayoze Perez was replaced by Javier Manquillo and that took a whole minute to complete.”

It seems that on further reflection nearly everyone seems to feel that Scott was right to award the goal. It was obviously a tough one for Rafael Benitez and his players to take, but Boly won the ball fair and square. Dubravka went up for it, as did Boly, and it was the Wolves man that came out on top. Really, the Newcastle ‘keeper should have just punched the ball and none of this would have happened. It’s a shame for him because he’d been playing really well up until that point. Halsey’s also right about stoppage time. The minutes that go up once regulation time is complete is the minimum that will be played in stoppage time. If things go on during stoppage time then that gets added on to the original time allocated. However, notice that Halsey makes no mention of what looked a clear foul on Miguel Almiron in the build up to the goal…