Hayden a credit to himself after goalscoring Wolves display 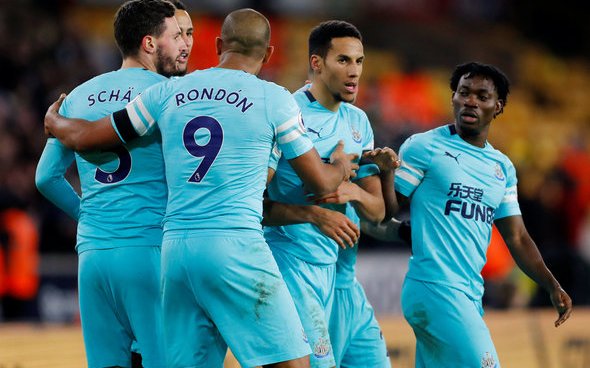 By now we all know that Newcastle United midfielder Isaac Hayden wants to leave the club, so it’s a credit to the player’s professionalism that he continues to put in performances like the one he delivered against Wolverhampton Wanderers on Monday night.

The Chronicle reported in January that the 23-year-old still wanted to leave the Magpies having failed to secure a move after handing in a transfer request last summer.

The former Arsenal man simply wants to be closer to his family down south, it’s nothing malicious against the club. However, since coming back into the team last month he has been a surprisingly solid player in the centre of midfield, even if he lacks the necessary discipline at times.

That continued against Wolves on Monday evening in another assured showing in the middle of the park. It was tough sledding at times against the hosts’ remarkable midfield trio at Molineux, but 6’1″ (source: Transfermarkt) Hayden was the one midfielder on the pitch who had a decisive impact on the game.

He opened the scoring for Newcastle with a powerful drive that Rui Patricio in all honesty should have saved. However, you just need to get your shot on target and see what happens, and that’s what Hayden did.

He looked much better after that goal and it was clear that his confidence was boosted. He harried the opposition relentlessly, recording a series of important interceptions.

In a time when players like Marko Arnautovic and Dedryck Boyata go into self-enforced exile in an attempt to secure a big money move abroad, it’s refreshing to see Hayden knuckle down and get on with the task at hand.

He could have sulked over not being allowed to leave in successive transfer windows. Indeed, earlier in the season he could have kicked up a fuss about a lack of playing time. Instead, though, he behaved professionally, trained hard and has taken his chance since coming into the team.

We don’t see enough of that in football these days and Hayden’s conduct has truly been a credit to him. He proved against Wolves that he is very much the surprise ultimate professional.