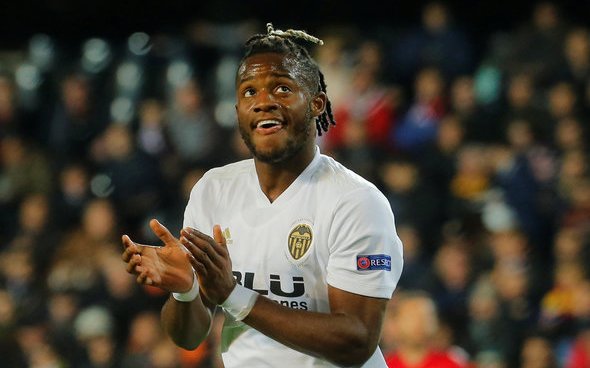 Everton will need to sell Cenk Tosun or Oumar Niasse if they are to sign Chelsea striker Michy Batshuayi this month, according to Sky Sports.

The broadcaster claim the Merseysiders are keen on landing the Belgium international, whose season-long loan at Valencia is set to be ripped up with immediate effect.

Sky report Everton can only have Batshuayi on a permanent deal as they have already signed one Chelsea player, Kurt Zouma, on loan this season.

There’s no doubt the Merseysiders are crying out for a penalty box predator who doesn’t get a nose bleed when the pressure is on and the opposition make life tough. Tosun and Niasse have failed to make the grade, while highly-rated Dominic Calvert-Lewin is not quite ready to lead the lead for a major Premier League club although his time will eventually come. Batshuayi is a signing for the here and now, although there must be concern that he has had a few iffy seasons and has made little impact at Valencia on loan in the opening half of the campaign. That said, Batshuayi fired at Borussia Dortmund while on loan and his record at Chelsea when he got on the pitch was actually very impressive. He is a born goalscorer and could be exactly what Everton are looking for.

Don’t rule this one out. Everton have been very ambitious when it comes to recruitment over the last few years, and signed two attacking players for £20million-plus last January. There will be concerns about spending big again, and it appears they will need to sell to buy, but if they can ship out one or both of Tosun and Niasse, this could be a go-er.