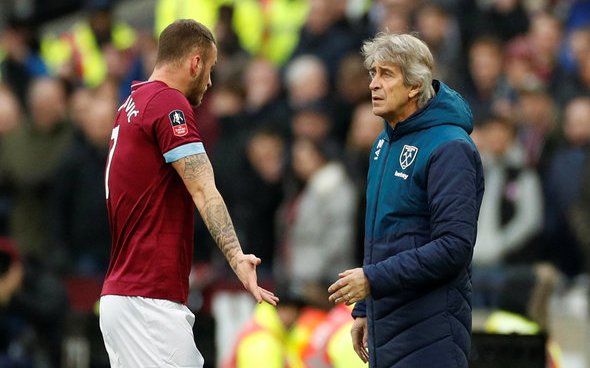 Peter Crouch has revealed that Marko Arnautovic discussed with him a few years ago the possibility of moving to China and his desire to quit West Ham “does not surprise me”.

Writing in the Daily Mail, the Stoke City striker and former teammate of the Austria international insisted it would be a “shame” if Arnautovic quit for the riches of the Chinese league when he is still at his peak.

“The interest in him from the Chinese Super League does not surprise me,” Crouch told the Mail. “I remember talking to him about it a couple of years ago when their clubs started buying players such as Oscar and Ramires from Chelsea. China was definitely on his radar.

“It would be a shame if he left the Premier League. He’s got all the attributes you need to thrive here and I think he’s shown during his time at Stoke and West Ham that he can be exciting. Being surrounded by even better players would bring further improvement.

“His head, though, will definitely have been turned by the amount of money on offer in China. West Ham are adamant that they will not sell him but it seems pretty clear that he wants to go, given what his brother, Danijel, said on Thursday.

“My concern is his age. He’s 29 and has so much to give at the highest level. I worry that if he goes to China, we won’t hear about him again.”

Crouch’s revelation makes it clear that Arnautovic has long been attracted by the mega wealth on offer in China, and that moving to a relatively minor league for eye-boggling riches has been an ambition for some time. It is not just West Ham fans who are left feeling uncomfortable that the best player at a fine and improving team wants to quit the Premier League for China when he is playing the best football of his career. Arnautovic shouldn’t be looking enviously at Oscar and Ramires. He should be dreaming of a transfer to a top-four Premier League club. He’s easily good enough. There isn’t a club in the land who wouldn’t want the big Austrian, whose rare combination of power, pace and technique makes him the stuff of manager’s dreams. That’s not to say he doesn’t need careful handling. Arnautovic clearly has the ego to match his talent, and he is not afraid of throwing the toys out of the pram if things don’t go his way. That said, he should be busting a gut to move to Liverpool or Manchester United, not China.