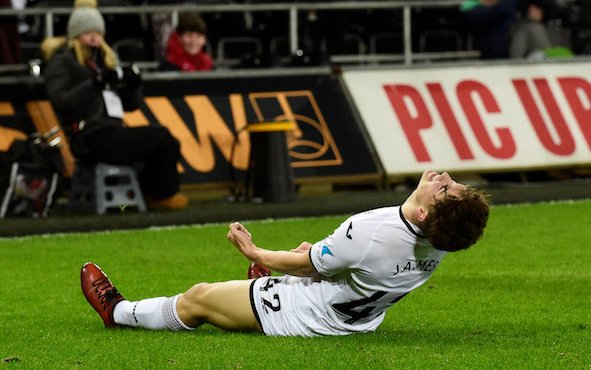 Leeds may have to pay a fee of £2million to loan Swansea winger Daniel James for the rest of the season, according to BBC Wales journalist Dafydd Pritchard.

He made the significant claim on his personal Twitter page on Thursday morning.

He said the £2million loan fee would then lead to a permanent transfer if Leeds got promoted, that could be worth more than £10million with add-ons.

This is double the £1million fee that was reported by the Sun’s transfer expert Alan Nixon earlier on Thursday.

Daniel James has told Swansea’s owners he wants to leave. His move to Leeds would initially be on loan, then permanent if Leeds are promoted.

Loan fee of around £2m, then a permanent transfer potentially worth more than £10m with add-ons.

Pritchard also said that Swansea want to keep James but feel they can’t after he has said he wants to move.

However, if Leeds don’t get promoted, then Swanseas would take him back and try to get him to sign a new contract, although Pritchard said that would be unlikely.

Swansea want to keep him but feel they can’t now James has told them he wants to leave. If Leeds miss out on promotion, Swansea would take him back after his loan and try getting him to sign a new contract – but that look unlikely.

All the talk has moved from a permanent deal to a loan, with a view to a permanent deal if Leeds get promoted. However, it looks like the actual terms of that deal and the fee are still to be agreed. At a £1million loan fee and an obligation after promotion, you’d have to say that Leeds are getting the best of it. However, there’s no guarantee that Leeds will get promoted and the question would be, how much do they want to gamble on that happening? £2million is a really hefty  fee to pay for a six-month loan, with no guarantee they’ll get to buy him in the summer. We’re not sure Leeds would agree to that, which means this deal may well rumble on. One thing is certain, Swansea aren’t making this at all easy for Leeds or for their player. They might not want to lose him, but he wants to go and his exit looks almost inevitable. Surely it’s only a matter of time now?