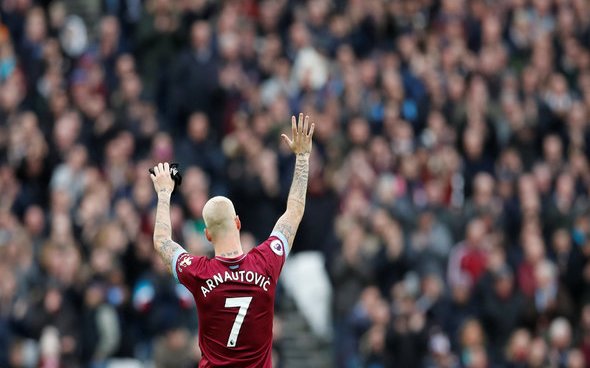 West Ham star Marko Arnautovic was pictured leaving Molineux on crutches after the club’s 3-0 thrashing at the hands of Wolverhampton Wanderers on Tuesday evening.

The Hammers were comfortably beaten in the midlands thanks to goals from Raul Jimenez, who netted a double in the final 10 minutes, and Romain Saiss, with Arnautovic forced to leave the pitch with just under 15 minutes left to play, finding himself replaced by Javier Hernandez.

Taking to his personal Twitter account, Press Association reporter Nick Mashiter posted a photo of the Austrian leaving the ground on crutches with a pained expression in what will be a worrying sight for fans.

Marko Arnautovic leaves Molineux on crutches. Not the best evening for him…#whufc pic.twitter.com/w2V1TBbiyX

After all that has gone on with Arnautovic this month the last thing the Hammers needed was some sort of injury. Seeing him hobble off during the game was worrying enough and this will send the east London faithful, as well as the management, into red alert. With the Austrian star very much the club’s talisman up front the panic that will likely be circulating is well and truly warranted and so everyone will be hoping that this is simply precautionary. It does not look good and there will no doubt be tests scheduled for either Wednesday or Thursday to find out the full extent of the damage. With the transfer deadline getting ever closer, anything serious might force Manuel Pellegrini’s hand and make him splash some cash to ensure that they are well covered in attack. Yes, Hernandez, Lucas Perez and Andy Carroll are already at the London Stadium but it is quite clear they are not fancied by the Chilean manager. Worrying times after a bitterly disappointing display on Tuesday and any positive energy at the club seems to be eroding quickly.