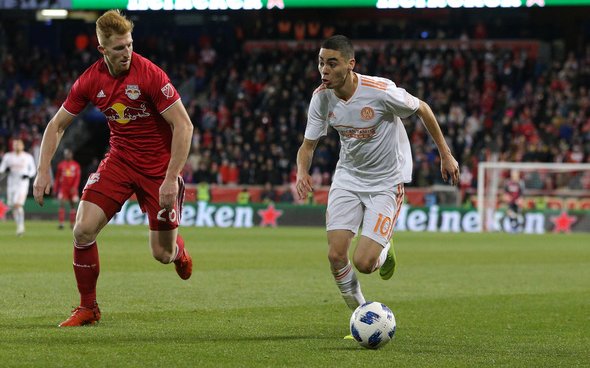 The agent of Paraguayan international star Miguel Almiron has confirmed that he has been in talks with Newcastle United over a deal for his client and that there is a chance of a deal being concluded.

The Atlanta United ace was in top form for his club last season, who won the MLS Cup and in turn won many people their Comeon voucher code 2019, with the midfielder scoring 13 goals and assisting another 13 on top, which has led to the 24-year-old being named as one of Rafael Benitez’s top targets this transfer window.

His agent, Daniel Campos, has revealed he has been in talks with the Magpies over a deal, hinting the move will be on if the club can meet Atlanta’s valuation.

He told Paraguayan radio station ABC Cardinal, as quoted by the Chronicle: “There are two to three clubs in England that have interest but we have not advanced much.

“With Newcastle, I spoke about the player’s salary, but the club needs to raise their offers with Atlanta if they want to get the player.

“If Newcastle raises their offers, they could be one of the clubs (to sign Almiron), but there are other clubs. There are clubs from England, Germany, Italy and Spain that are interested in Miguel Almiron, but we aren’t going to rush things.”

Confirmation that Newcastle are chasing Almiron’s capture – but that there is an every growing queue of suitors for his signing. The Magpies must surely realise that while they might lead the way now they do not stand a chance of engaging in a bidding war with their rivals and as such need to get a deal done immediately or miss out on his capture altogether. Unfortunately the St James’ Park outfit are not in the business of splashing cash and so while Almiron’s agent has been talking to them, he is likely to be shaking hands on a winter move elsewhere in England or across Europe. Benitez will not be happy that his side came so close only to see their efforts fall at the final hurdle and it could well be that a failure to sign Almiron results in the Spaniard’s exit at the end of the season, with his contract set to expire. That really would be a heavy blow for the Toon Army.