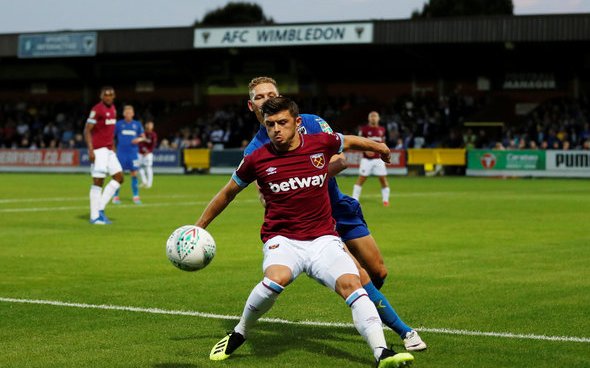 West Ham left-back Aaron Cresswell has suffered a hamstring injury and will undergo scans to ascertain the extent of the problem on Monday, according to club insider ExWHUemployee.

Ex, who is an established source for exclusive Hammers news on Twitter, reported on Sunday that the 28-year-old flyer was withdrawn from the action against Newcastle on Saturday after 56 minutes due to a hamstring complaint.

It is said that Cresswell will now have to undergo tests on Monday to determine the severity of the injury.

Its a hamstring, he will have scans on Monday to examine the extent https://t.co/IBB7YPcwfV

This could be a big blow for the Hammers, who have not had brilliant luck with injuries so far this season. Manuel Pellegrini is already having to deal with some problems at right-back with Ryan Fredericks out for three months, leaving Pablo Zabaleta as his only natural option in that position. Should Cresswell be ruled out for a while as well then Pellegrini will be left with just Arthur Masuaku to cover on the left. That would be far from ideal for the Chilean and the Hammers, who would possibly have to delve into the January market for a new full-back option. Obviously the extent of Cresswell’s injury is still as yet unclear, and hopefully it is a minor one. He had put in a really good performance before he was forced off with the problem, and showed that he is a better option defensively than Masuaku, who has been the preferred option so far but illustrated his defensive frailties when he came on.