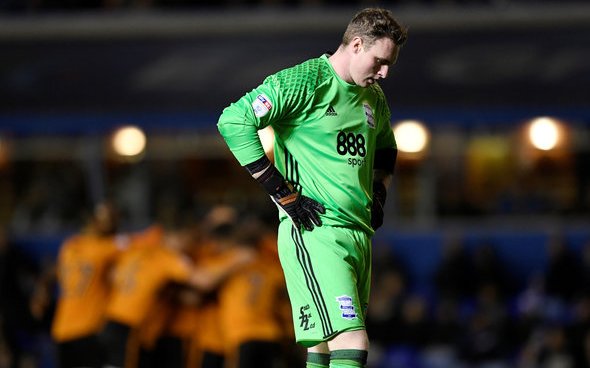 Eagle-eyed Leeds fans have noticed that Birmingham goalkeeper David Stockdale has returned to his parent club after an emergency loan to Wycombe Wanderers, and many of them have urged the 6ft 3in 33-year-old to head to Elland Road in January.

Leeds were exploring the possibility of an emergency loan themselves after loanee Jamal Blackman broke his leg and Bailey Peacock-Farrell was injured.

In the end, Peacock-Farrell was only out for one match and that means Leeds can no longer get anyone in before January unless he’s injured again.

Manager Marcelo Bielsa had ruled it out anyway, preferring to promote from within.

That could change in the January transfer window. Leeds surely need an experienced goalkeeper to provide competition for Peacock-Farrell in the second-half of the season and Leeds-born Stockdale could be ideal.

He’s been frozen out at Birmingham and is highly unlikely to play there this season and he was obviously frustrated at being called back from Wycombe early.

I’d like to thank everyone at @wwfcofficial for my short time there. Wish I could have helped for longer but unfortunately I’ve been recalled by Birmingham city. I wish you all the best in the future. Thank you????

At 33-years-old he needs to be playing and Leeds could afford his wages.

There are plenty of Leeds fans who would love to see it happen.

To be sold to Leeds in January

Could come home to Leeds….in need of another keeper!

Don’t unpack you will be at Elland Road next

We had both our gk out before you went to wycombe,why didn’t you come home to leeds david?

Hopefully a loan move to a club that you deserve. Fingers crossed you come to Leeds and either push BPF on or come in as number one.

Would live to see you at Leeds

Let’s start a petition to Victor Orta, demanding he gets Stockdsle in on loan . Otherwise he’d be clueless to realise he’s available

Genuinely hope you come to LUFC. Keep fighting and enjoy your Christmas ????

See you in a Leeds yersey after New Year. MOT