Preston North End are reportedly looking to sign Everton forward Fraser Hornby on loan next year – and it is an absolute no-brainer for Marcel Brands to sanction a temporary deal.

Hornby, 19, is yet to get a real taste of men’s football having only ever made one senior appearance in his entire career, which came in Everton’s Europa League win against Apollon Limassol last season.

However it looks like the Scotland Under-21 goal machine has the chance to continue his development elsewhere in the North-West with the Sun on Sunday reporting in their print edition [Sunday October 14, page 61] that Preston have joined a “queue” of clubs wanting to sign him on loan. 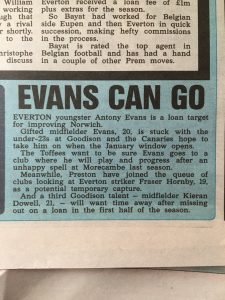 It would certainly be a good move for Hornby, but unfortunately the Liverpool Echo has recently reported that he will be out until next year after undergoing surgery on an ankle injury.

That means that a move to Preston may be even more important for the youngster in January as it could help him get back to full fitness and help him continue his development into the top forward that everyone hopes he can be.

Under-23s football just isn’t enough for someone of Hornby’s potential and you can see that he needs to playing at a better level.

Preston are third from bottom in the Championship right now, so they certainly could do with the extra fire power and would be grateful for the Toffees lending them Hornby’s services.

Director of football Brands simply must make this move happen as it will benefit every party involved.