Everton ready to pounce for Vardy 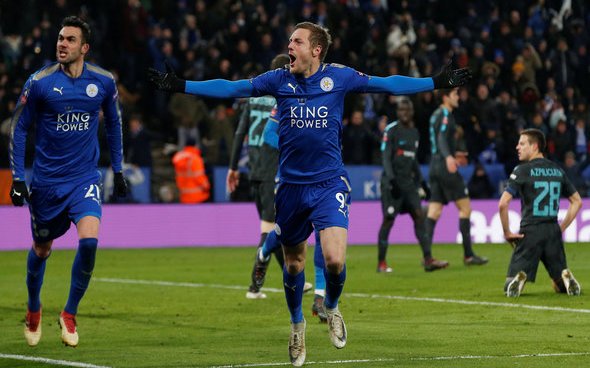 Everton are ready to pounce for Leicester City star Jamie Vardy amid his rocky relationship with Foxes boss Claude Puel, according to the Mirror.

The newspaper report that the Toffees have held a long-standing interest in the 31-year-old former England international, and could make a swoop in January depending on the situation.

The Mirror claim that Vardy was angered by Puel’s decision to leave him on the bench in their 1-1 draw with West Ham on Sunday, with the two believed to be at odds with each other in recent weeks.

It is said that Everton boss Marco Silva is a big fan of Vardy’s pace and goal record as he looks to return the Toffees to the top-six.

Vardy would reportedly cost £25million, a price which Everton would be more than willing to pay considering Vardy’s impeccable fitness record.

Despite his advancing age Vardy still has that jet-heeled pace which has brought him to the top of the game with Leicester, and that would be a major asset for Everton in attack.

His goal record for the Foxes, particularly in the last couple of seasons, has been exemplary, and Everton could do with a boost in the goals department in January.

£25million seems like a lot for a 31-year-old striker, but there is no doubt that Vardy would give them several years of good service, and prices in today’s market are so inflated anyway.

This one looks like it depends on whether Vardy’s relationship with Puel is mended by the time January rolls around.

The senior Leicester star is obviously not happy with Puel’s management style, and that could be something which leads to an exit for either man in the coming months.

Should Puel receive the backing of Leicester’s owners, then you would think that Vardy may look to leave, and that would open the door for Everton to pounce.

If Puel ends up being sacked at some point soon, then Vardy would likely remain at the King Power.