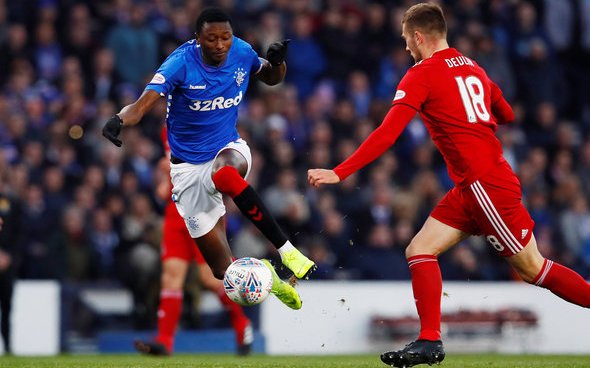 Rangers legend Ally McCoist was stunned by what striker Umar Sadiq did in the Scottish Cup semi-final against Aberdeen.

But Rangers striker Sadiq seemed to have a brilliant chance to level things up in the 83rd minute when he was played through on goal.

He took it round Joe Lewis in goal but then went down under a soft touch from Michael Devlin.

If he’d stayed on his feet he would have had an open goal and McCoist delivered his verdict on the BT Sport live coverage after the game (BT Sport, Sunday, 4pm).

“He [Sadiq] looked like a young 19 or 20-year-old centre forward, he did some good stuff but he was raw and naive,” McCoist said.

But when asked about the incident, where Sadiq got booked for diving, he said, “I just don’t know why he went down there, I can’t believe it. He could have kept his feet and just slotted it into an empty net.”

Steven Gerrard had a big decision to make and went with Umar Sadiq up front, despite some heavy criticism from the manager a few weeks before. And while Sadiq tried, the experiment was ultimately a failure that led to heartbreak for Rangers. The incident in the 83rd minute sums it all up. Sadiq showed huge naivety to go down when it looked easier to score. he could have made himself an instant hero then but instead he’s been slated by pundits and manager alike. Talking after the game Gerrard said his advice would be, if you’ve gone round the keeper to stay on your feet and score. It’s tough to know whether Sadiq was put off balance and fell or whether he decided to try and get the penalty, but if it was the latter it was a high-stakes gamble that didn’t pay off. It’s robbed neutrals of the Old Firm final that everyone wanted and it’s robbed Gerrard of a shot at his first trophy as Rangers manager.