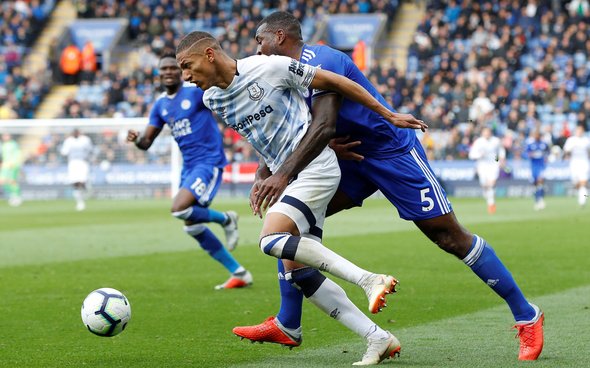 Former Premier League referee has said that Richarlison’s reaction to a Wes Morgan challenge was “worthy of an Oscar” as the Leicester City man was sent off in their 2-1 defeat.

The Toffees saw off the Foxes courtesy of goals from Richarlison and Gylfi Sigurdsson, the Icelandic star unleashing a rocket of a shot to seal victory after Ricardo Pereira had levelled the scores for the home side at the King Power Stadium.

However, Halsey insisted that Brazilian winger Richarlison made the most of the tackle from Morgan which saw him pick up his second yellow card of the game, and that the Everton man deserved an award.

Writing in his column for the Sun, he said: “He saw red for the second time in three league games on Saturday — for four yellow-card offences which never left a mark on anyone.

“Andre Marriner gave Morgan a second yellow against Everton after he clearly won the ball and clipped Richarlison’s foot in the process.

“The Brazilian’s reaction was worthy of an Oscar but, having just warned Morgan for bundling the Toffees star over, Marriner bought it.”

Richarlison is known to have a bit of bite about him but this time he showed his nous to get Morgan to be given his marching orders. It was a soft foul to see red for but it was to accumulation of warnings that ended up with him sent off, and the Brazilian’s reaction did not help the defender’s cause one bit. Whatever your thoughts on simulation and the like, when a strong reaction, as shown by the Everton man, can influence a referee all the players are going to be doing it to gain an advantage. There either needs to be a crackdown on faking injuries or referees being more lenient with their bookings – otherwise players are going to be seeing red more and more often, thus ruining the game. As for Richarlison’s Oscar nomination, he might want to focus winning awards on the football pitch first, for the Toffees could really do with some silverware.