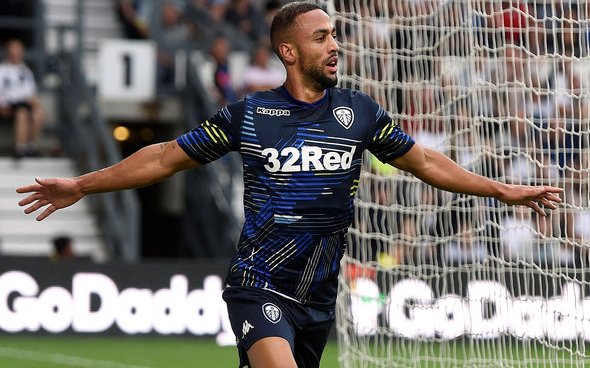 A section of Leeds United fans have taken to Twitter to express their delight at reports that the club are set to open new contract talks with Kemar Roofe.

Football Insider broke the news on Tuesday that the Championship giants will attempt to tie the 25-year-old down to extended terms to replace his current agreement, which expires in the summer of 2020.

Many Leeds supporters took to Twitter to share their keenness for Roofe to get a new deal, with comments including “excellent news”.

With a number of Premier League clubs keeping close tabs on Roofe, it is becoming a matter of priority for the club to tie the player down to a long-term deal. The forward, who signed from Oxford in the summer of 2016, has been something of a slow burner at Championship level but he is now one of United’s most important players and a favourite among supporters. They recognise how influential he has become after building on an impressive 2017-18 campaign in which he topped the club’s scoring charts with 14 goals to develop into one of the most potent forwards outside of the top flight. Roofe struck four goals from Leeds’ opening six matches of this season and tore defences to shreds in the early weeks of Marcelo Bielsa’s reign. Aged 25, he is entering his peak years and many Leeds fans are keen for him to spend that time at their club.

Amazing how this situation has turned around! We were all willing to drive him to Reading ourselves when that rumour surfaced over summer! Fair play to him!

He wasn't good enough until this season. The I told you so's are based on being wrong last season. He's been fantastic this year, but it's a mile off his previous form.

Let him have a good season first , rather than a good month! (As long as his contract does not run out at end of the coming season) I'm all for a new contract , but he needs to earn it by having a good season and spearheading the promotion push.

Got to laugh at the few that wanted to sell him for £7mill to reading????

Amazing what difference a season makes.