Hayden must be ashamed of display v Arsenal 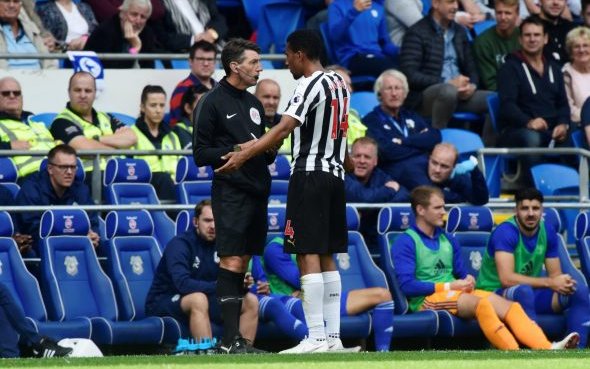 Newcastle United’s bad luck is to continue to roll on after they were subjected to yet another defeat at the hands of Arsenal on Saturday afternoon.

The Magpies were largely outplayed for the majority of this fixture, and their only consolation was a stoppage time goal from substitute defender Ciaran Clark to ensure the score was only 2-1.

However, fingers must start being pointed, as their start to this Premier League season could go down as one of their worst yet if they continue to churn out these poor showings.

One player who must be named and shamed is defensive midfielder Isaac Hayden, who it is safe to say had one of his worst displays in an United shirt.

The Magpies’ enforcer was more of a spectator than a player, and for most of the match, he looked rather lazy and did not seem to want to chase any balls that they lost.

He lacked effort in every department, and boss Rafa Benitez must oust him from the team completely if this is the way that he wants to play.

The Spaniard does not need players like Hayden – who is 6ft 1in [Transfermarkt] – in his starting line up, especially when this season is one of their most important.

Instead of replicating their tenth-placed finish last term, the team are in a position where they could potentially be fighting for their survival in the top-flight this time around.

This is why Benitez cannot afford for players like Hayden to hamper these chances, and he must be axed immediately to show that the manager will not put up with players who cannot be bothered.

As Hayden has previously stated that he wanted to move closer to his family, his commitment to Newcastle is arguably not as strong as it could be, and this could ultimately be why he is lacking any sense of urgency when he is on the pitch.

However, that is no excuse – and he must be punished for his dire display.

Benitez is not in a position where he can allow Hayden to let his team down again, so he must prepare the 23-year-old for the chopping block.