A Leeds United injury crisis will force Marcelo Bielsa to ring the changes for the first time in the league this season as he makes final preparations for Saturday’s clash against Millwall.

The United players underwent their final full training session ahead of the game at their Thorp Arch headquarters this morning before heading to the capital for what is a real examination of their title credentials.

Bielsa is set to make at least three changes to the side that drew against Middlesbrough before the international break, with injury robbing him of Kemar Roofe, Pablo Hernandez and Gaetano Berardi.

All three would start at Millwall if they were fit and available for selection. 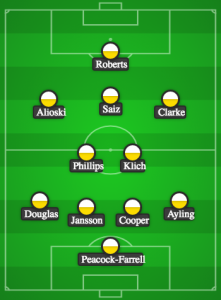 Bielsa explained at his media briefing on Thursday that Tyler Roberts is set to spearhead the attack at the New Den in the absence of Roofe and £7million summer signing Patrick Bamford.

Pontus Jansson will almost certainly come in for Berardi, while most of the team pick themselves after their excellent performances in the opening six league games of the season.

Bielsa has been able to pick virtually an unchanged side for those fixtures, which have yielded 14 points and catapulted Leeds to the top of the Championship.

The big decision for the manager is which of Manchester City loanee Jack Harrison, Northern Ireland international Stuart Dallas and exciting youngster Jack Clarke to start on the right flank against Millwall.

Harrison is the man in possession after replacing the injured Hernandez against Boro, Dallas has the experience.

But Bielsa has never been shy of following an untrodden path and could well plump for 17-year-old Clarke, who has been destroying defences both this season and last at Under-23s level.