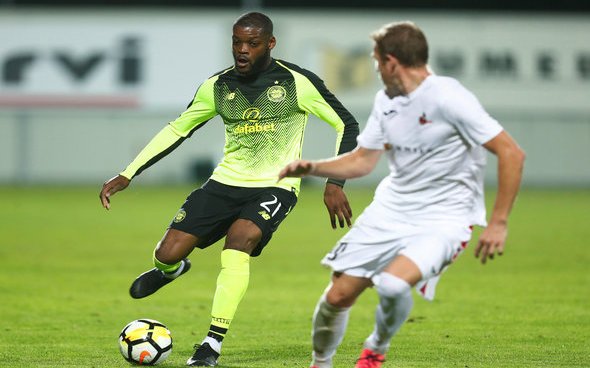 Celtic have everything to play for when they welcome FK Suduva to Glasgow next week after being forced to play out a 1-1 draw in Lithuania on Thursday.

Even if you don’t know how to read odds the Hoops looked as though they would breeze past the home side in their crunch Europa League qualifier but after a bright start, which included Olivier Ntcham netting after just three minutes, Brendan Rodgers’ men were pegged back by a set piece goal – not something the defence will want to look back on any time soon.

It means that the Bhoys have a slender advantage – in the shape of an away goal – going into the second leg, but what can the fans take away from Thursday’s outing?

This is Futbol has rounded up three things learned from the stalemate:

One surprise in the starting XI was the inclusion of 19-year-old winger Mikey Johnston, a young talent who has begun to break into the first team.

Having been hit-and-miss in previous displays, it seemed a gamble to play him in such an important match but it was a risk which paid off, the starlet setting up Ntcham for his early opener with a delightful cross from out wide.

He continued to dazzle down the left flank for the rest of the game and constantly had Suduva on the back foot with his face, close control and crossing technique.

With displays like this, he has an exciting future at Parkhead.

With Odsonne Edouard out of action through injury, it was left to Moussa Dembele to lead the line, and while he persevered as best he could as a lone forward, it was evident he needed another striker to act as a foil.

The Celtic players seemed unable to read his movement and ended up utilising him as a focal point to build attacks off, rather than feeding him the ball as a finisher.

Things improved with Leigh Griffiths’ arrival onto the scene and it looks as though Rodgers will have to figure a way to get the pair playing together, for on his own, Dembele looked out of his depth.

Defensive trio must be on chopping block

Another European tie, another sloppy goal conceded as a result of defensive errors, and it is becoming all too commonplace for the Hoops this season.

A drifted ball in from a free kick – which should have been simple to deal with – had the Hoops beaten all ends up and gave the home player an easy headed to equalise.

It was the central trio – goalkeeper Craig Gordon and centre backs Kristoffer Ajer and Jozo Simunovic – who are to blame for it was their duty to keep things tight, but with the shot stopper coming into no man’s land, it all fell apart.

Gordon replaced Scott Bain in the starting XI but his position must be under threat, while Ajer and Simunovic should also have Rodgers sharpening his axe as he tries to figure out a solution to their defensive woes.