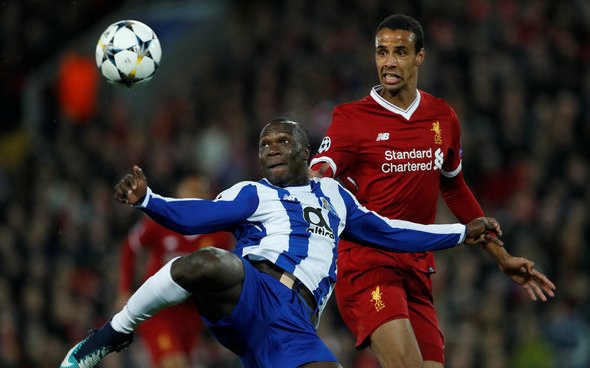 A section of Liverpool fans have taken to Twitter to annihilate Joel Matip as he closes in on a first-team return.

The giant centre-back came through a 60-minute practice match involving senior and academy Liverpool players at Melwood on Wednesday night as he steps up his rehabilitation following five months on the sidelines.

Many supporters of the Premier League giants are not convinced that Matip should be recalled to the senior side despite the absence of Dejan Lovren for around a month.

Softest centre half we’ve ever had.needs to toughen up

I think he’s amongst the softest centre half halves around and much prefer Lovren as VVD’s defensive partner.

Not even close to being good enough.

Never seen such a big fella be such a fairy in the tackle. Not good enough! Give me Klavan over him any day at least he’ll put his head in where it hurts! For me he’s at the bottom of the CB pecking order

Hell no!
Too soft for me.

Klavan and Matip need to go!

Matip isn’t it for me hey. Not as a starter for Liverpool. Him and Lovren as backup is fine. I think Klopp has to play Gomez.

Quite why these Liverpool fans are so anti Matip is something of a mystery. The giant centre-back has not played for five months due to a thigh injury and absence does not appear to have made hearts grow fonder in this case. Yet the 6ft 5in Cameroonian has consistently been the team’s outstanding defender since signing in the summer of 2016 on a free transfer that is yet further proof of the club’s ability to find value in the transfer market. Matip’s awareness, distribution and aerial dominance make him a fearsome opponent for forwards and, while some critics among the fanbase have pointed out that he is not tough enough in the tackle, he reads the game so well it is only ever a last resort. Perhaps, Matip’s reputation has suffered from the immense impact made by Virgil van Dijk, who makes the role of centre-back look ridiculously easy. Also, Lovren played the best football of his Liverpool career alongside the Dutchman – no coincidence – in the final months of last season. That said, all top teams need four top-class centre-backs. In Matip, Liverpool definitely have one, whatever some say.