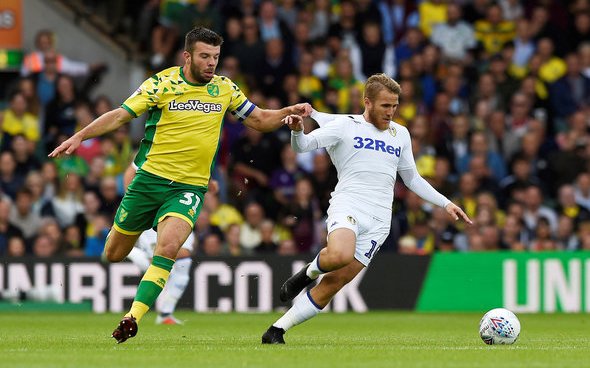 A selection of Leeds United supporters were left tearing into the performance of attacking midfielder Samu Saiz on Twitter after he failed to impress in the win over Norwich City on Saturday.

Goals from Mateusz Klich, Ezgjan Alioski and Pablo Hernandez ensured that Marcelo Bielsa and his men left with all three points from Carrow Road, and putting the Whites on top of the Championship table with their unbeaten start to the season.

However, 5’7″ attacking mainstay (Source: Transfermarkt) Saiz bore the brunt of much of the supporters’ frustrations after a sub-par performance in comparison to his team mates, with one fan jesting that he had not passed to anyone since 2005.

This is Futbol has rounded up a selection of the supporters’ tweets:

saiz hasn't completed a pass since 2005

Saiz got to do better with that. Not having a great game #lufc

Double nutmeg was on there for Saiz. Very poor #lufc

Saiz not having his best day, passing seems a bit all over the shop. Chance for Baker? #lufc

Saiz off colour today. Not passed to a team mate yet and wasted ball when in good positions. #lufc

Saiz having an awful game and we are still 2 nil up. So important the confidence levels of Klich, Alioski and Roofe stay high. Hard to believe our front field is the same as last season….. #LUFC

It is hard to pick out any sort of negatives from what was a dominant performance from Leeds down in Norwich but these fans certainly found something to complain about in the shape of Saiz. He was by no means showing his best form against the Canaries, wasting possession with some poor passing and failing to have the desired impact in the final third. Thankfully for him and the supporters his attacking counterparts stepped up to the plate and put Norwich to the sword, with Hernandez’s wonderful strike topping off what was a fine performance all round. However, if Saiz does continue to be a bit of a liability up front Marcelo Bielsa will have no qualms in hooking him for someone else, such is the ruthlessness of the Argentinian manager. It should bring the best out of his squad and the same should apply to Saiz in weeks to come.