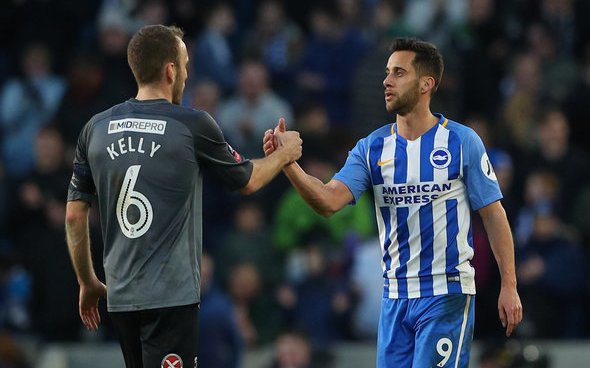 Brighton striker Sam Baldock has not had the most successful seasons at the Amex in the 2017/18 Premier League , a campaign he would have been hoping to enjoy with his team mates upon their promotion to the top flight.

Nevertheless, it was not meant to be as the 29-year-old forward was not boss Chris Hughton’s first choice last term, who preferred Glenn Murray in the main striker role –  resulting in no appearances for the former England under-20 international.

The Brighton Argus have reported that the Seagulls could offload Baldock this summer, with Reading amongst the clubs interested – however, West Brom should secure his capture for themselves and see themselves propelled to the next level.

Despite having a torrid season down on the south coast, the former Bristol City attacker still has a lot to offer up front, and he still possesses the talent to be a prolific goal scorer – and boss Darren Moore should be jumping at the chance to bring him to the Hawthorns.

In the season which saw them promoted, Baldock netted 12 goals to aid the team in their pursuit of their Premier League dream, and has always been considered a reliable substitute when things are not going his team’s way.

Leonardo Ulloa arrived at Brighton last season, and this saw Baldock demoted even further – but with the Baggies, he should be assured of regular football.

The futures of Salomon Rondon and Jay Rodriguez remain unclear, and the Englishman would be the perfect player to step up to the plate in place of the pair.

Brighton will not see him as much of a loss to the team, but West Brom would value him highly in their pursuit of Premier League promotion.

He needs regular playing time to reinvigorate his goal scoring ability, and joining forces with Moore would be the perfect opportunity io achieve that.

Now West Brom need to brush Reading aside and secure a capture that could propel them to the next level – favourites for Premier League promotion.