Celtic to offer Mikey Johnston to Hibs in McGinn deal 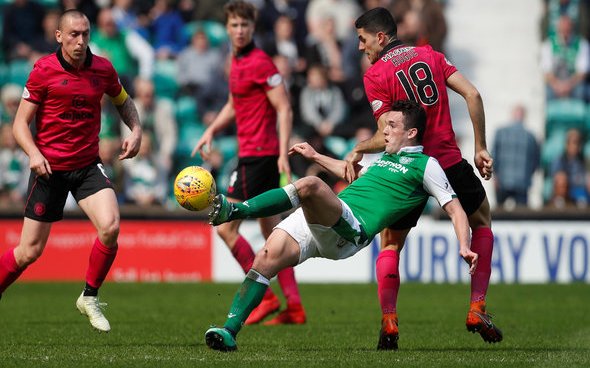 Celtic will offer midfielder Mikey Johnston to Hibs on loan in a bid to push through a deal for John McGinn, according to the Daily Record.

The Scottish Champions have already had two bids for McGinn turned down – for £1.5million and £2million.

McGinn is out of contract next summer and Celtic don’t want to pay too much for him, and see the Johnston sweetener as a possible solution to the problem.

Jonhston is in-demand after Celtic have already had talks with St Mirren over him, with Aberdeen and Hibs keen too.

Without a doubt. The 5ft 10in Scotland international would strengthen the Celtic midfield and Brendan Rodgers would be getting a bargain if they don’t have to increase their bid of £2million by too much. The report says Celtic don’t want to pay over the odds but they know that’s not the case. They’d be getting a player whose resale value will be much more after playing for the Scottish Champions. The big problem for Hibs is that McGinn’s contract runs out next summer and that’s drastically reduced their bargaining power over the deal.

We do think this move will happen and it’s probably the best for all parties. In Johnston, Hibs would be getting a talented winger who Aberdeen have their eye on too. Johnston is geared up for a loan move and could be the key to getting this deal done. Hibs won’t want to lose McGinn for nothing next summer so really this is about holding on for the best deal possible. If Celtic aren’t prepared to spend any more money, then Hibs will eventually take what’s on offer. However, we still think there’s more money and Johnston to be had. £2.5-£3million would seem like a fair price.