Wolves could be set to lose the services of enforcer Prince Oniangue, as SM Caen hold an interest in signing him, according to Ouest France.

The French newspaper claimed via their print edition, as translated by Sport Witness, reveals that Oniangue is likely to leave Molineux this summer after failing to hold down a starting position. 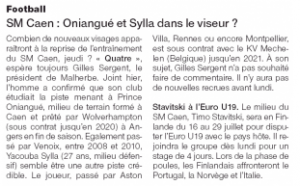 The Congo international has played most of his club career in France, so could be comfortable with a move to the interested Ligue 1 club.

The 29-year-old defensive midfielder’s most recent position was also in France, having spent the second half of last season on loan at Angers.

Oniangue only ever made 10 appearances for Wolves, and could not work his way into the starting lineup at the Molineux.

With Nuno Espirito Santo’s ambitions now lying further up the Premier League, the calibre of player has risen as well, so it would be good to part ways with the midfielder now.

With Santo’s links with Jorge Mendes, it is not like there will be any shortage in players when looking for a replacement.

Wolves status in the Premier League has all but confirmed the Congo international’s exit, as if he was not able to get into the team in the Championship, it wouldn’t happen for him in the Premiership either.

The links are there to the French Ligue 1, having spent a number of years playing for various teams across France, so you get the feeling that he is comfortable there.

After having just paid out to retain Ruben Neves, getting Oniangue off of the wage bill will further help the Midlands club.