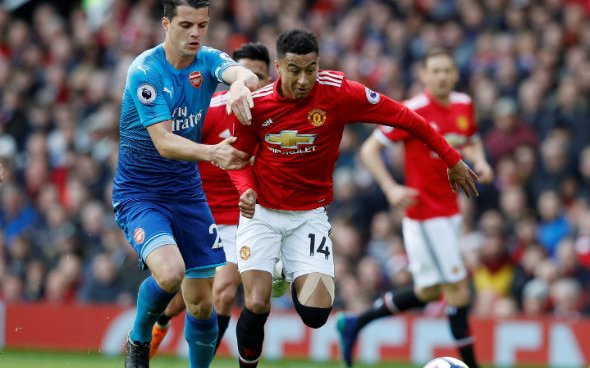 Manchester United scored a last-gasp winner to beat Arsenal 2-1 at Old Trafford on Sunday afternoon, and fans have taken to Twitter to destroy the performance of Jesse Lingard.

United took just 15 minutes to take the lead against a youthful Gunners side when Romelu Lukaku teed up Alexis Sanchez, who saw his header rattle off the post before Paul Pogba turned the ball into an open net.

Arsenal gradually came back into proceedings and were rewarded just after half-time when former Red Devil Henrikh Mkhitaryan guided a low shot past David de Gea and into the bottom corner from outside the box.

It looked as though the game would end with the points shared before substitute Marouane Fellaini popped up with a brilliantly clever injury-time header which nestled in the corner.

That condemned Arsene Wenger to another defeat in his last game at Old Trafford as Gunners boss, with the Frenchman first losing in England at the ground.

United fans took to Twitter after the match to slam England international Lingard, who put in a lacklustre performance alongside Sanchez and Lukaku in attack, with many calling for Anthony Martial to start in his place.

I’m sorry but Lingard dropped one of the worst performances I’ve ever seen against an arsenal B side and nothing’s being made of it? Is he just immune to criticism now cause he dated Jena Frumes???

This idiot is back on my TL. The fact is Lingard was AWFUL and Rashford did nothing when he came on the pitch. I've never seen two boneheads like Lingard and Rashford on the pitch like that. They couldn't do anything against Arsenal's development team. https://t.co/Mt9Mvu4JCL

Martial needs to start the next game. Lingard offers nothing more than effort. He can't pass the ball more than 5 yards

How long do we have to pretend lingard is actually good enough for us? Let's face the facts