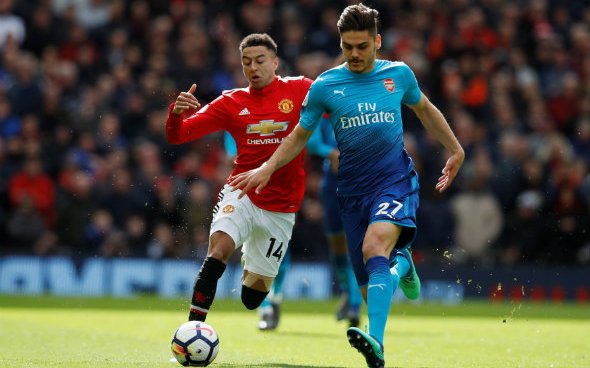 Arsenal fell to a last-gasp 2-1 defeat to Manchester United at Old Trafford on Sunday afternoon, but Gunners fans have taken to Twitter to rave about the display of debutant centre-back Konstantinos Mavropanos.

The 20-year-old Greek centre-back was a surprise name in the Arsenal starting XI, with fellow youngsters Reiss Nelson and Ainsley Maitland-Niles also named in the side as Arsene Wenger rested players for their Europa League semi-final on Thursday.

The Gunners went behind after 15 minutes when former star Alexis Sanchez crashed a header against the post only for Paul Pogba to turn home the rebound.

Arsenal gradually made their way back into the game and got their reward through former United man Henrikh Mkhitaryan just five minutes after half-time when he guided a low shot into the bottom corner from just outside the box.

Wenger’s young side looked good for a point until an injury-time header from Marouane Fellaini broke Gunners hearts and handed the Frenchman another loss on the same ground he first suffered defeat as manager in 1996.

Fans after the match took to Twitter to praise the display of Mavropanos, who looked assured on his first appearance for the club since signing in January.

I am SO impressed by Mavropanos' showing so far! Hope he only goes on to improve from here!

Can we actually play Mavropanos over Mustafi on Thursday. Only good can come from it

Mavropanos has been quality so far well done

Mavropanos immense. Hopefully Mister Mislintat will do it again.

We played really well, expected another 8-2 but we did so well. Shame ospina has T-Rex arms and terrible technique. Mavropanos could be a world beater too ?????? #MUNARS

I definitely wanna see a lot more of Mavropanos. He looks like he’ll become a really good defender. So composed for his age.

Mavropanos should start as GK next one. The kid is a beast