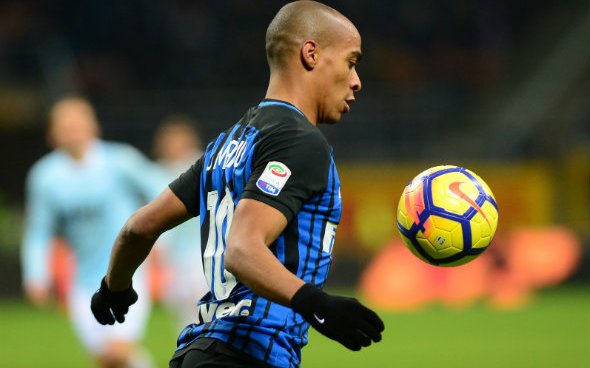 Inter Milan have offered midfielder Joao Mario to Everton during the January transfer window in an attempt to get the 25-year-old off their wage bill, according to Calciomercato.

The Italian football outlet report that the Serie A giants have offered the Portugal international to five clubs on loan this month as they look to get rid of the big-money flop.

Calciomercato claim that the clubs in question are Everton, Watford, Atletico Madrid, Sevilla, and West Ham, who have been heavily linked with a move for the attacking midfielder.

It is said that the is reluctant to leave Milan, and has already rejected the chance to join Watford this month, while remaining unsure of a move to West Ham.

As reported by the Mirror, Hammers boss David Moyes was set to jet out to scout Mario this weekend before making a final decision on the 25-year-old.

Mario was a key part of the Portugal side that won the European Championships in 2016, and his displays earned him a £40million move to Inter.

Everton already have a glut of attacking midfielders at the club, and are hardly in need of another.

Wayne Rooney, Gylfi Sigurdsson, Davy Klaassen, Nikola Vlasic and Tom Davies already able to fill that position, there is definitely no need for another one at the club, especially one who is on high wages.

Mario has also been hugely unimpressive during his time at Inter, and Everton would do well to avoid a move for the 25-year-old.

The report does not state what Everton’s reaction to Inter’s offer was, and that would suggest that the Toffees are not interested.

It looks as though West Ham may be in with a shout for Mario, and Everton would be best off letting the Hammers secure the Portugal international.