Can Brazil REALLY win the World Cup without Neymar? | thisisfutbol.com

Can Brazil REALLY win the World Cup without Neymar? 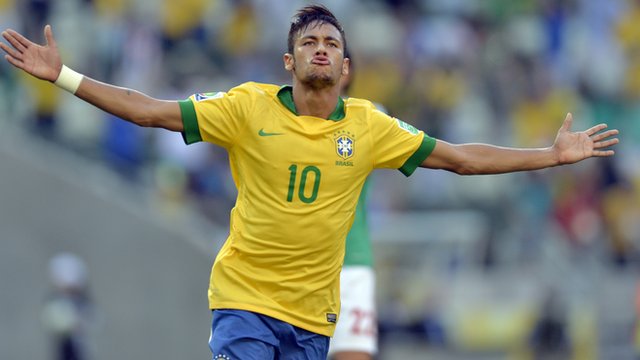 Any hope Brazil had of winning the World Cup has just died with the news of Neymar’s injury. Everything was bet on him. This tournament took the best player Brazil had and tore him down. The rest of the team will lose hope.

Neymar has not set the world alight in the same way James Rodriguez has this summer but he has been, by some distance, Brazil’s best player and it is clear that with him in the side, his teammates are more relaxed. The fact that the Barcelona forward left the pitch with only two minutes left to play shows that there was no time for a Brazilian capitulation to take place. But, if the injury had taken place 20 minutes before, it would have taken a brave man to predict Brazil’s progression into the next round.

It would be a disservice to the rest of the Brazil team to say that the difference between them winning and losing their semi-final between Germany is Neymar, because both teams are blessed with amazingly talented individuals. Despite home advantage lying with the South American team, the Germans have been heavily backed to win the entire tournament and thus even a fully-fit Neymar may not have been enough to overcome a Germany side that will surely come of age in this tournament and win their first major competition since 1996.

What is true, however, is that now Neymar is out of the World Cup, Brazil no longer have a player that strikes fear into the hearts of the opposition. David Luiz and Thiago Silva are a formidable defensive partnership and are excellent at both attacking and defending set-pieces, and Hulk usually grabs headlines at club level, but Neymar is on a different stratosphere. The team is, or rather was, entirely built around the 22 year-old. He is the reason Luiz Felipe Scolari usually opts for at least two holding players in midfield to give their star forward license to roam,and he is also the reason Hulk, a striker who has averaged one goal every two games at club level for the last two years, is often pushed out wide to accommodate their star forward. Neymar takes their free kicks, Neymar takes their penalties. Neymar is Brazil’s go-to player.

Such is football that Brazil going on to win the World Cup sans Neymar would not be the most surprising thing ever to occur, but if Brazil weren’t at home against Germany, who would class them as favourites to beat the nation ranked second in the world? It is doubtful that the likes of Neuer, Lahm, Muller and Klose will become overwhelmed by having to play in a stadium dominated by Brazil fans, which is something that Brazil have benefited hugely from so far when facing lesser teams. The Germans will play the same way regardless of who they play and Neymar being ruled out will not drastically change their approach to the game from a tactical perspective.

Thank you Neymar for dragging your country through the group stages and leaving everything on the field after each game. It is unfortunate a World Cup that promised so much for you is now looking rather bleak, but whatever happens, you’ll always have Rio…