Manchester United hone in on Bundesliga ace, but does Fergie need another striker? 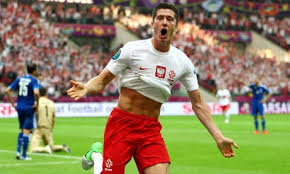 At a first glance Manchester United’s possible capture of Robert Lewandowski seems like a great buy, but with Robin van Persie, Rooney and Hernandez already firing in the frontline does Fergie really need him?

Sir Alex whose team are leading goal scorers in the Premier League with 37 goals already this season, wants Rooney to play in behind a new pairing of van Persie and Lewandowski, according to the Daily Mail.

The Polish frontman, who has netted 14 times already this season for German side Borussia Dortmund, has told friends he has his sights on a move at the end of the season, according to the newspaper. If the striker does make the move in the summer, United will have five top strikers who would fit in any other Premier League team- Lewandowski, Rooney, van Persie, Hernandez and Welbeck. All capable of grabbing 20 goals a season given the opportunity.

Lewandowski who impressed at Euro 2012 this summer plays as a lone striker for current side Dortmund so would have to alter his attacking style in order to accompany van Persie and Rooney up front for United. There is the saying ‘too many cooks spoil the broth’, with professional footballers this shouldn’t be the case, but with Lewandowski enjoying the role of frontman at Dortmund would he really adapt kindly to a partnership?

In my opinion, Lewandowski’s arrival will mean Welbeck will have to look elsewhere in search of first team football. The England International who is down the pecking order already at Old Trafford will end up being fifth choice behind a multimillion strike force. The striker who is a regular in Roy Hodgson’s England team will want to get regular football in order to keep his England number nine jersey.

There is no doubt that Lewandowski is a class player and would fit in any Premier League side and score goals, but in my opinion Fergie should be looking elsewhere in his line-up. The unreliable David De Gea should be a worry for the Scot who has always had a confident number one goalkeeper throughout his tenure. Although United have scored 37 goals this season they have conceded 21, ten more than rivals City, including three against relegation threatened Reading at the weekend.

Obviously you can’t just blame the goalkeeper, dubbed the worst defending of the season by SAF himself on Saturday, United’s defence should be something he should look at before bolstering his attacking line. The goalscorers are scoring the goals there isn’t a problem there, but the defenders aren’t keeping them out.  Vidic is on his way back into the team which will be good news for the Reds who have only kept four clean sheets in all competitions all season. In his absence a partnership of Rio Ferdinand and Jonny Evans has seen them ship goals, going behind early on in games on numerous occasions this season.

Lewandowski is out of contract at the end of next season, so United will be hopeful of getting a regularly cheap deal. The signing will see the Pole reunited with Shinji Kagawa who moved from Dortmund to Manchester this summer, a partnership that provided a lot of goals last season but one that would probably not be welcomed by the Japanese midfielder. Kagawa made his feelings towards his former team mate in May this year, calling him ‘too selfish’. (Source: The Mirror)

Dortmund have been very successful in this season’s Champions League qualifying first out of the ‘group of death’ that involved Real Madrid, Ajax and Manchester City with Lewandowski contributing four goals. So you can see why Sir Alex is interested in him but maybe his focus should be on improving other areas of the team first, before trying to improve probably the best strike force in the league.