Can PSG Seriously Join the Elite? 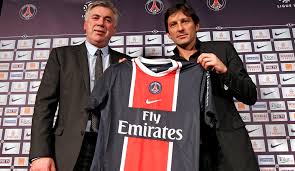 For the first time in their forty-two year existence, Paris St Germain are threatening true domination. Paris, traditionally cast as one of the worlds most powerful and prominent metropolis’, has, historically, been almost excluded from serious footballing influence. It has harboured not the deeply-entrenched cultural impact of football in London, nor the style and relevance of football in Madrid.

Lacking too from its inhabitants is the passion of Munich and the emotion of Milan. In the realm of history, Paris has been something of a footballing pariah, out of kilter with the rest of a continent that so feverishly feasts upon football.

Such an image is beginning to change. Exorbitant investment from the Qatar Investment Authority has transformed the city’s most recognizable club, attracting a new, more vibrant fan base and delivering stars of the world game to the Parc des Princes. The Qatari group took over a club languishing not only in its own inefficiency, but in a city devoid of care for its biggest club. Following mid-table finishes and poor showings in the domestic cup competitions, PSG were on the verge of slipping into obscurity, without a fuss or a whimper. Now, however, fans and experts are discussing not whether PSG can build a championship challenge, but whether they can threaten on a continental stage in the UEFA Champions League. Such is the transformation of the Parisian club.

The syndicate in charge at the club, led by Nasir el-Khelaifi, has delivered on its promise of vast and quick investment. Last season, as the club underwent its most pressing initial metamorphosis, one-hundred-and-eight million Euros were pumped into the improvement of a depleted squad. Arriving in France, world stars such as Javier Pastore and Jeremy Menez, and veteran quality such as Maxwell and Alex. The project was off and underway.

When Carlo Ancelotti agreed to take over as manager of the club, it became clear that, as a club, PSG were serious about delivering to its fine city a football club to be proud of. Regarded as one of the games great thinkers and tacticians, Ancelotti was thus held up as evidence of Parisian intent. Working in tandem with Director of Football Leonardo, Ancelotti promised major signings of his own and, this summer, has made the biggest statement in Europe with his dealings and tinkerings in the transfer market. He may well have added legitimacy to the PSG claim for elite status.

By luring to Paris players such as Zlatan Ibrahimovic, Ezequiel Lavezzi and Thiago Silva, St Germain are once again pressing forward with their efforts to grow and develop. On paper, theirs is a squad that could match any currently present on the continent. However, the game is played not on paper, but on grass, and it is there that these players must justify their transfer fees. It remains to be seen, but, in their haste to form true history and hunger to win major honours, Paris St Germain may still fall short. In their continued bid to join the continents elite clubs, Paris St Germain may have grown too much, too fast; a methodology that they may live to regret.